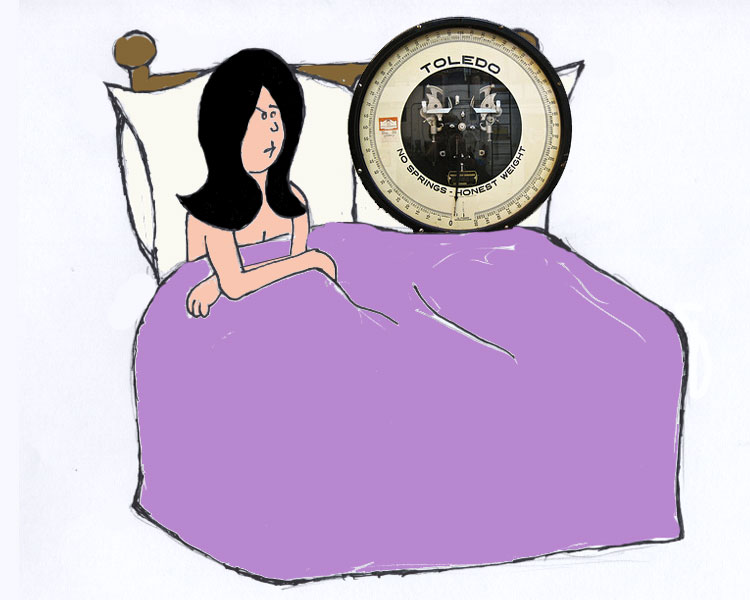 Dear “Dr. Diet”:
When we were in Ohio, my husband and I bought our first scale – an original Toledo (“No Springs… Honest Weight”). It’s ruining my life! I never used to weigh myself.  Now when I get on it and I see that my weight has jumped from 142 to 150, I feel fat, unattractive and become unresponsive to my husband. Why does my weight interfere with our sex life?

In the 1920s, the Metropolitan Life Desirable Weight Tables became an institution within the medical community. From that time on, patients were weighed as a routine part of a physical examination and were told whether their weight was desirable or undesirable. Right around the same time, Detecto Scale Company designed a scale for home use.  In 1925, over one million were sold!  We became obsessed with weight with how we perceived ourselves.  Our outer image became wrapped up with our weight and that new torture device – Scales – became dictators.  Mr. Detecto still rules.

Scales have no heart and they hate your guts

Even though your scale says “Honest Weight,” scales are probably the most dishonest and archaic measure of real body weight.  Scales weigh anything you put on them. They have no eyes, no heart and they hate your guts!  Think about this: you weigh 142 pounds one morning–you feel svelte and sexy. You meet your husband that evening for a romantic dinner. (“A loaf of bread, a jug of wine and thou.”) The next morning, you wake up, jump on your best friend, the scale and (Holy Toledo!) you weigh 150 pounds. Now the scale’s your enemy.  What happened?  First of all, there are many reasons that we have body weight fluctuation.  Being pre-menstrual, for example, could easily put 3-5 pounds on the scale.

Eating spicy food, developing a thirst and then drinking a lot of water will affect your weight also.  Medications, excessive exercise, sun burns and a million other reasons will make the scale fluctuate when you really haven’t gained any real weight. These are temporary, transient and necessary water fluctuations (which we all experience) and they have nothing to do with real body weight.

The scale cannot distinguish between fat and water

As an experiment, take a 16-ounce glass of water and put it on the scale.  It will weigh one pound.  Now if you change the container from the glass to your body, you will also show a one-pound gain.  The scale cannot distinguish between fat and water.  The only way you could actually gain five pounds overnight is to eat 17,500 calories in excess your daily need (that’s more than 30 Big Macs).  If you want a scientific method for accurately measuring body fat, try Dual X Ray Absorptiometry (DXA).  This requires that you lie on an exam table and two low energy x-ray beams of different energy are passed through your body and it measures lean body mass, bone and fat. However, this device costs between $40,000-$100,000, a bit more than you paid for your Toledo not to mention the radiation each morning.

If you still insist on weighing yourself every day, why not record these daily weights and average them at the end of the week?  Your average weight is closest to your real weight. Don’t let the scales of injustice dictate your life – they’ll weigh you down.  And don’t let Toledo upset your libido.

P.S. if this advice is effective, have your husband send us a thank you note.