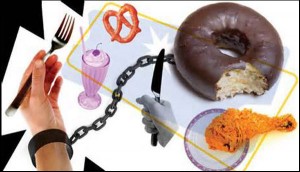 I Am Out-Of-Control With Food

Recently, a very successful career woman told me that she is very much in control of her life, except when it comes to food. Her question to me was, “Why am I always out-of-control with food?”

Many Bariatric Counselors (male or female) will tell you that this type of question is rarely posed by men. It is one of the distinctive differences between the sexes as it relates to bariatric counseling for obesity or eating disorders.

From chastity belt to corsets, control remains at the very core of the female dilemma. From the beginning of recorded history, women have been dominated by regulations. When it relates to body image and weight, contemporary women can feel just as oppressed when they are expected to surrender to the cultural myths of what they are supposed to be.

(The Supposed To Be) Male Myth

Men are supposed to be freewheeling, bold, bigger-than-life, lawless and irreverent. They need not suppress their feeling or needs. If they want it, they take it … or fight for it. They can break the rules. Being “out of control” is an option and part of the control system. When it comes to food and drink, whoever consumes the most is the “real man.”

(The Supposed To Be) Female Myth

Woman are supposed to be smaller than life, tiny, mini, petite and dainty. They must self-censor, suppress and contain their needs and feelings. They are the peacemakers the nurturers. Being out of control is perceived as anti-female. Women have to curtail their appetites … eat light, eat small, leave something on your plate. Even laughter is often volume-controlled down to a giggle … always life with the brakes on. I am not sure that being in control is anything more than being controlled by the “supposed to be” female myth. Being “out-of-control” could be an outrageous defiance of the “supposed to be” rules.

Women that have come to peace with food and controls make their own rules. If they eat a sleeve or two of Oreos, so what? They have declared their independence from the “supposed to be” mandates. They are self-governed and apply the brakes when they choose to.

The late, great Jazz singer Billie Holliday said it best: “Ain’t nobody’s business but my own.” Control is most often the sub-text of eating disorders and likely the reason that it is most often a women’s issue. Bulimia is often an enraged volcanic eruption, an explosion and a defiance of the rules. Conversely, Anorexia is an implosion, a shutdown and a hunger strike … total control. The “supposed to be” rules and control remain a lingering female legacy for many women.

The Suffragettes of a New Era